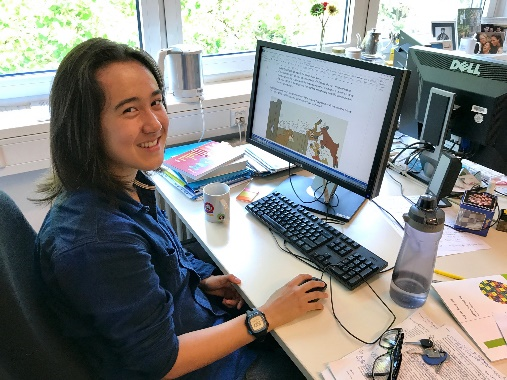 In the last few years, I have become especially passionate about spreading my enthusiasm for math to my friends who have not yet discovered an interest in the subject. In school and in college, math is not a very popular subject; it is considered too difficult, too boring, and too abstract and irrelevant to the real world. When I first arrived in Berlin Office, I was astounded to find that my team at “Mathe im Leben GmbH” were not only concerned about students’ attitudes toward math, but they had the same philosophy and goals as I: they wanted to present a new side of math, one that can be accessible and enjoyable to everyone. From the first day, it was very satisfying to be working for a company whose purpose echoes the positions I have long stood for.

My first task was to read the “Qualitätskriterien”, or “quality standards” for the Mathe im Advent problems and translate them to English. At this point, I was familiar with neither the Mathe im Advent competition nor the German language. Figuring out the details of the program while simultaneously learning the language proved a huge challenge; however, after just one day, the task was manageable, and my German comprehension had already improved astronomically. After my colleagues had the chance to review the translation, they gave me positive, constructive feedback. I made clear to my colleagues that I wanted to speak only in German this summer, and they were delighted to accommodate this wish, even if at first it took a couple times for me to understand a task they were explaining. I am very thankful for their patience and reception.

I was given two “Mathe-Wichtelbücher”, or “Math Elves books” to read, which contained published problems from the Mathe im Advent competition. These are very special types of math problems, which pool some the most interesting mathematical ideas from subjects including calculus, group theory, game theory, number theory, and topology, and fuse them with compelling scenarios. The Mathe im Advent team has developed an Elf World on the North Pole, complete with reindeer, Santa Claus, and innumerable elves which have acquired their own personalities throughout the years’ problems. Every day in December, a new problem is published online at 6:00 AM, which schoolchildren, as well as “just for fun” players, can access, and they can submit one of the multiple choice answers until 11:00 PM. Schoolchildren have the opportunity to compete and win prizes at the yearly awards ceremony in Berlin. Recently, there have been around 150,000 participants every year.

The problems are designed so that students can get excited about the real-life challenges that the elves face on the North Pole, which are tinted with both logic and humor. At the end of reading the set up, we hope they will have intrinsic motivation to solve the problem, and not even be aware that they are necessarily doing math. Just like in these problems, we want to convey that math is seamlessly integrated into everyday life, and that logical thinking can make experiences more rewarding, meaningful, and enjoyable.

In my internship, I translated many problems from each of the two levels of “Wichtelbücher” (4th – 6th grade and 7th – 9th grade). My advisors, Stephanie Schiemann and Robert Wöstenfeld, hope that we can release a “Wichtelbuch” in English with problems, each of which would have several methods of solution and a “Bigger Picture” section explaining the context of the problem, a “Math behind the Scenes” giving a glimpse into the math at work behind the problem, or a “for Further Thought” section posing enriching questions for reflection and further discovery. In addition, I translated many unpublished problems that we hope to use in Mathe im Advent online competitions in the coming years in the English-speaking world. After the large success the company has had in Germany, we hope to move it and its mission of spreading the joys of math to countries such as the USA, Great Britain, Australia, and New Zealand. Thus, I have also done research about math competitions in the various countries in order to survey the competition and already extent opportunities for mathematical enrichment across the world. I have, however, come to the conclusion that nothing like Mathe im Advent exists across all of the continents.

A few years ago, the Mathe im Advent team had a professional informative film made about the project. The filmmakers visited schools in Germany and compiled kids and teachers talking about their experiences with and thoughts concerning Mathe im Advent. The film was published in two versions: a long 6-minute version, and a shorter 2-minute version. I edited both of these films, adding English subtitles to them, in order to bring them to a larger audience. One of the team members, Robert Wöstenfeld, will be flying to California this fall and presenting Mathe im Advent in America. We hope that the translated problems and films will be effective in garnering support for the project.

Halfway through my stay, the Freie Universität Berlin, along with many other universities in Berlin, hosted its annual “Lange Nacht der Wissenschaften” (“Long Night of the Sciences”), in which each of the departments puts together activities and events for the public to enjoy. I was surprised, and delighted, to see how popular an event this was; there were posters and flyers for the “Lange Nacht der Wissenschaften” across Berlin, on buildings, in parks, on bus stops, and in subway stations. As a member of the Mathe im Leben team and a “Mitarbeiter” of the FU Berlin, I worked at the math department’s stand at the “Lange Nacht der Wissenschaften”, which started at 17:00 and lasted until midnight. I was in charge of several mathematical games, including the African game Kalaha, which I explained to kids and adults who stopped at my station. This experience was excellent practice communicating with the public, as well as clarifying potentially complicated rules in German. I was also able to walk around the university and see other departments, of which I was impressed by a theater performance of a biology Nobel Prize awards ceremony, and the research of a geophysics graduate student who collected offshore marine data to map the subsurface under the ocean floor.

Once I was familiar enough with style and intent of the Mathe im Advent problems, I was given the opportunity to author some of my own problems. This creative task was the highlight of my internship; I found myself thinking about how I could integrate the math I was passionate about into my own stories, even in my spare time outside of work and on weekends. The first problem I authored was a reindeer relay race, which used modular arithmetic, with the Little Fermat Theorem in the background. I was thus able to use topics I found fascinating last semester in number theory to contribute to this project. In addition, I am an avid runner, and the idea of a race shared with friends is personally significant to me. I first wrote the problem in English, then later in German. One particularly helpful co-worker, Milena Damrau, sat down with me and edited my German version, thoroughly explaining the correct grammar and word usage, helping me find exactly the German words to fit my intended meaning, and making sure I understood all of the corrections.

I later authored a problem with a basic introduction to integration; the “packing elves” knew their relative speeds of packing presents, and needed to figure out the number of presents they packed. Again, I wrote the problem in both English and German, and was guided through the corrections of my German draft.

During the time of my internship, the Gymnasien (rough equivalent of American high schools) were finishing their school years, and the students graduating and going to college were taking the Abitur (exit exam). The DMV Netzwerkbüro was in charge of organizing and shipping the Abiturpreise for the best-performed students on the Abitur. Teachers, principals, and secretaries from across Germany would call for information about ordering the Abiturpreise and the enrichment math textbooks that accompanied them. From listening to these conversations, and speaking with Stephanie Schiemann, who works in the DMV Netzwerkbüro, I was able to get a good grasp of the school system in Germany. She explained to me how the different districts in Germany were set up, and how students progress through the school system depending on their abilities and interests.

I was also able to write an article for the DMV Medienbüro. Thomas Vogt, who works in the Medienbüro, expressed an interest in having an article about the Human Brain Project and Blue Brain Project, recent endeavors to understand and simulate the human brain in its entirety. I did much research on these projects and related efforts, and authored an article in both English and German. I was given feedback on both of my articles, which I revised and re-submitted, and which may appear on the DMV website.

The internship with „Mathe im Advent“ was the perfect first work experience for me. I was surrounded with enthusiastic mathematicians whose vision for a project had come to fruition and seen enormous success in recent years. The project, which echoed my desire to bring to light the joys of math, even for non-mathematicians, was inspiring to me, and gives me hope that it is possible to reverse the image of math as an unwelcoming, exclusive subject. I was very lucky to have had the chance to combine my understanding of math with my creative drive and my love of the German language. I intend to stay in touch with the Mathe im Advent team in the future and help bring the project to the rest of the world.